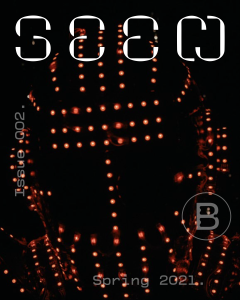 BlackStar Projects, producer of the BlackStar Film Festival, is proud to announce the launch of the second issue of Seen, its twice-annual journal of film and visual culture made for and about Black, Brown, Indigenous, and other artists of color.

Issue 002 of Seen will be available for pre-order here beginning May 25, and the print and digital editions will be officially released on June 18th.

“As each piece in this issue exemplifies, this work of carving out space is both transformative and integral to Black, Brown, and Indigenous communities around the world.” writes Lopez Cassell in her introduction to the issue. “It is often quiet, slow, spiritual, and perhaps most importantly, it is ongoing.”

The release of Issue 002 is accompanied by a dynamic IG live series featuring Seen contributors. All conversations will take place between Blackstar’s Instagram (@blackstarfest) and Seen’s (@seen_journal). The first live conversation aligns with partner organization Color of Change’s Racial Justice Week of Action, and will take place on May 25th at 2:30pm ET with special guests Keisha Rae Witherspoon and Gina Duncan. On June 1st, Astria Suparak and BlackStar Festival Director Nehad Khader will go live at 4pm ET, and June 8th will feature Dessane Lopez Casell and Jlin, live at 4pm ET.

The release of the new issue of Seen kicks off BlackStar’s summer season, which includes the 10th anniversary of its signature program, the BlackStar Film Festival, which will run from August 4-8, 2021. This year also marked the launch of several new and ongoing initiatives, including the Blackstar 10th Anniversary Print Sale and podcast Many Lumens. A new limited edition print by celebrated artists is released on the 15th of every month to fundraise in honor of Blackstar’s first decade. Participating artists include: Garrett Bradley, Arthur Jafa, Kahlil Joseph, and Cauleen Smith. Meanwhile, BlackStar’s new podcast Many Lumens now has five episodes available — all illuminating conversations between BlackStar Artistic Director and CEO Maori Karmael Holmes and a range of guests, including dream hampton, Janicza Bravo, and Blitz Bazawule.

Issue 003, to be released later this year, will be edited by writer and filmmaker Darol Olu Kae.